← Back to journal
Poswa will exhibit new, large-scale sculptures in Exceptions d’Afrique and Ceramics Now, marking her second foray into Europe after her appearance at PAD London in 2019. 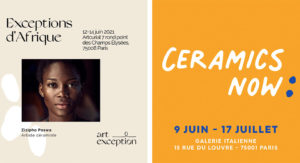 Fresh off her debut solo exhibition iLobola, a body of work paying homage to the spiritual offering at the heart of the ancient African custom of lobola, or bride-wealth, ceramicist Zizipho Poswa will take part in two group shows in Paris next month. Poswa will exhibit new, large-scale sculptures in Exceptions d’Afrique and Ceramics Now, marking her second foray into Europe after her appearance at PAD London in 2019.

Exceptions d’Afrique will present contemporary fine art and craft by 26 artists from 15 African countries, from 12-14 June at French auction house Maison Artcurial at the Hotel Marcel Dassault. The exhibition is an initiative of Art & Exception, an independent non-profit that promotes and preserves Africa’s cultural heritage, and was commissioned by Nelly Nana-Wandji, an independent Cameroonian curator. Poswa has produced a new piece for the show titled Umthwalo-iBhelekazi and is an extension of her Umthwalo collection.

Bringing together timeless mediums and new approaches, curiosities and remarkable pieces, the works at Exceptions d’Afrique will present a new generation of artists, designers and artisans. “This exhibition, conceived as an overview of the African continent and its exceptional talents, will showcase a powerful new African aesthetic, at the forefront of a generation of pioneers,” explain the organisers.

Works by Meyer von Wielligh and Hamed Ouattara are also among the more than 40 pieces to be showcased. Meyer von Wielligh has created The Cliff, a drinks unit made from ebonsied ash and inspired by the beautiful rock layers found in the Little Karoo, while Ouattara has produced two cabinets in his signature style of furniture created by the repurposing of recycled, titled Tombouctou and Djenné. These two pieces form part of a larger series of eight pieces. Other exhibitors include Jean Servais Somian (Cote d’Ivoire), Ousmane Mbaye (Senegal), Christiane Rwagatare (Rwanda), Ghizlane Sahli and Maison Meftah (Moroccco), and Lisa Folawiyo (Nigeria).

Exceptions d’Afrique is part of Saison Africa2020, a pan-African and multi-disciplinary project centred on innovation in the arts, sciences, technologies, entrepreneurship, and the economy. Initially planned for June to December 2020, Saison Africa2020 was postponed due to the pandemic, but is currently running until September 2021. N’Goné Fall, a Senegalese curator, editor, cultural consultant and academic, is the chief curator. Exceptions d’Afrique also forms part of the Révélations Biennial “Hors-les-Murs” programme carried over to June 2022, of which Poswa’s Magodi-Abongile is the signature work. A selection of the works will form part of the auction of contemporary African art happening on 15 June at Artcurial.

For Exceptions d’Afrique, Poswa added to her Umthwalo collection with the piece titled Umthwalo-iBhelekazi. 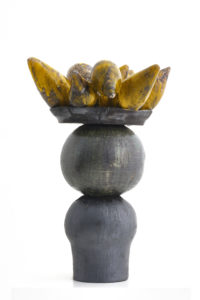 In its first year, Ceramics NOW brings together work made over the past three years by established ceramic artists as well as emerging talents from around the world. The exhibition runs from 8 June to 17 July 2021 at Galerie Italienne, a contemporary art gallery a stone’s throw from the Louvre. It places a spotlight on the growing and ever-changing practice of ceramics, bringing its unique energy and diversity to the fore.

Umthwalo-uMadlamini is the dazzling piece created by Poswa for the show. 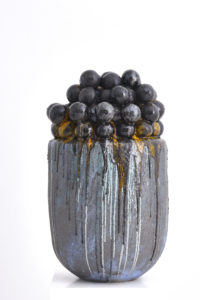 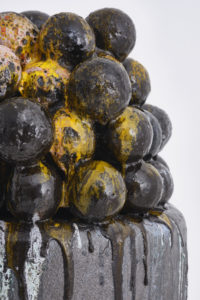