New works by Xandre Kriel inspired by his industrial roots

New works by Xandre Kriel inspired by his industrial roots

Kriel’s fascination with form began as a boy growing up in the small industrial town of Ashton in the Western Cape, where fruit from the lush farms of nearby Montague was processed and canned.  Every weekend he would visit his grandparents in Montague, driving through Cogmanskloof Pass with its jagged, folded rock formations. As his grandfather worked in his garage fixing cars, he would sit on the floor alongside, breaking apart old Olivetti DE523 computers. So began his appreciation for mechanical components, alongside an attraction to the futuristic – a tension clearly evident in his latest work for SGX. 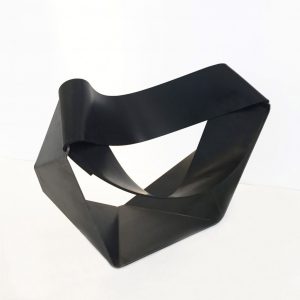 Techno Loafer is a low-sitting lounge chair assembled using 8 mm steel and a piece of repurposed conveyor belt – a continuous strip of waxed rubber that is pulled taut through a heptagonal steel frame. There is a simplicity to Techno Loafer that belies the complex conceptualisation underpinning it. The chair’s elegant silhouette is the result of a creative process that seeks to leave the worked materials as unaltered as possible, so that the finished product could fit seamlessly into the environment from which it was borne. The materials used to create it display the qualities of their primary states and nod towards Kriel’s industrialised roots. 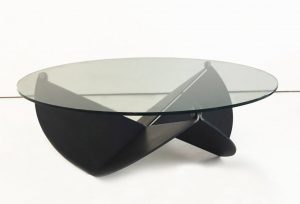 The second new piece — a table called Tulp — conveys a sense of weightlessness that contradicts the true density of the 8 mm steel and glass used to construct it. In this way, Tulp’s graceful design transcends the constraints of its materials even as it utilises their potential for expression. This beauty arises not only from the table’s physical form – three angles of bent steel, three bolts, and a thick disc of glass — it also exists in the intangible element of light and shadow, in the way that the table casts three bright lines upon the ground below it, extending the piece’s composition and enhancing its propensity for balance, harmony and symmetry. 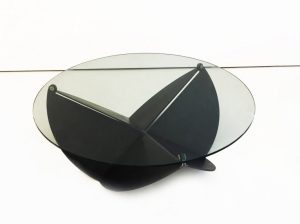