← Back to journal
"[T]he Afrofuturist Period Room offers an important opportunity to start new dialogues and illuminate stories that are yet to be told within our walls."

On November 5, the Metropolitan Museum of Art in New York City unveils a long-term installation, Before Yesterday We Could Fly: An Afrofuturist Period Room, that transforms a 19th-century domestic interior into a space untethered by time. Three Southern Guild artists – Andile Dyalvane, Chuma Maweni and Zizipho Poswa – will each have works featured in this modern take on the period room, alongside work by Ini Archibong, Cyrus Kabiru, Roberto Lugo, Tourmaline, and others. 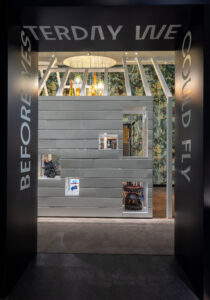 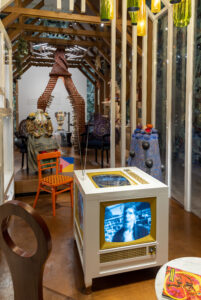 Like traditional period rooms, the installation is a fabrication of a domestic space that assembles furnishings and works of art to represent a fixed moment in time. However, this new space will unsettle the very idea of a period room by embracing the African and African diasporic belief that the past, present, and future are interconnected. Consulting Curator Dr. Michelle Commander believes that the period room “celebrates the ingenuity, artistry and determination of people of African descent and reconfigures how we think about space, place, and time”.

Powered by Afrofuturism – the inspirational, creative mode that centres Black imagination and self-determination – this speculative home is activated through vision, sound, and storytelling. Before Yesterday We Could Fly is furnished with a range of works from The Met collection – from Bamileke beadwork and 19th-century American ceramics to contemporary art and design—that foreground generations of Black creativity. The period room is significantly located at a central intersection where galleries for Early Modern Europe, nineteenth-century Britain, and the American Wing meet – a placement that alludes to the linked colonial histories embedded in the Afrofuturist Period Room.

“The Met’s distinguished collection of period rooms present not only outstanding objects and displays, but also complex relationships towards history and authenticity that call for reinterpretation and intervention. As the first to present a constructed space of now and tomorrow rather than a filtered perspective on the past, the Afrofuturist Period Room offers an important opportunity to start new dialogues and illuminate stories that are yet to be told within our walls,” said Max Hollein, the museum’s Marina Kellen French Director.

Lead curator and designer Hannah Beachler says: “This project is important to me because it is a necessary conversation with time, loss, community, and hope.”

A narrative based on an erased community

The exhibition’s narrative is generated by the real, lived history of Seneca Village, a vibrant community founded by free Black tenants and landowners that flourished from the 1820s to the 1850s in New York City’s Manhattan, just a few hundred yards west of The Met’s location at 82nd Street and Fifth Avenue. Seneca Village’s roots date back to 1825, with the community flourishing over the following decades. As with so many other independent African American communities throughout the United States in the 19th and 20th centuries, Seneca Village’s prosperity was short-lived. The City of New York destroyed the village in 1857, using eminent domain to seize land for the construction of Central Park and make way for a different type of place, one intended for a wholly different community. 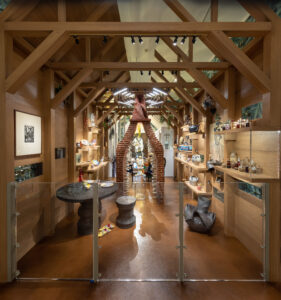 Acknowledging the injustice of Seneca’s destruction, the exhibition asks: What if this community had the opportunity to grow and thrive? Powered by Afrofuturism, the exhibition transforms a 19th-century domestic interior into a speculative future home for Seneca Village residents whose time there was so unjustly cut short. Similarly, the title Before Yesterday We Could Fly, evokes the project’s speculative narrative. It is inspired by famous children’s book author Virginia Hamilton’s legendary retelling of the Flying African tale, which celebrates the imagination of enslaved peoples, creative uses of flight, and the significance of spirituality and mysticism to Black communities in the midst of great uncertainty. 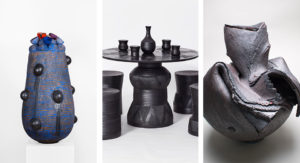 Inspired by the river crevices and “dongas” (ravines) dominating the landscape of his rural village, Nogobozana, in the Eastern Cape, Dyalvane’s Umwonyo was created during his 2019 residency at the famed Leach Pottery in St Ives, Cornwall, in the UK. The works he made at Leach reflect aspects of the environment where they were created – the Cornish coastline with its cracks, tearing and “floppy movements” – which reminded Dyalvane of the landscape back home.

Noxolo forms part of Poswa’s Magodi series, her second major body of work. It looks to the sculptural forms of traditional African hairstyles, such as the Bantu knot and dreadlock, and the central role that hair salons play as a meeting place for women. Each work is named after a family member or close friend, honouring her own support network.

Lastly, Maweni’s Imbizo Installation of clay furniture was inspired by the idea of an imbizo, a forum or meeting called by a traditional Xhosa or Zulu leader. The table and stools have each been handcrafted, including the wooden table-top that Maweni carved into himself. Each Imbizo piece is always completely unique in shape, colour and patterning.