← Back to journal
iThongo means “ancestral dreamscape” in isiXhosa and is a reference to the medium through which messages (uYalezo uLwimi IwabaPhantsi) are communicated from the ancestors.

Andile Dyalvane’s iThongo opens at Friedman Benda on 29 April 2021, marking his second solo exhibition at the New York gallery. The collection made its debut in Dyalvane’s rural homestead in Ngobozana, Eastern Cape, in November last year before moving on to Southern Guild in Cape Town. Its presence at Friedman Benda will invite cross-cultural dialogue from a wider global audience in response to its message of collaboration and spiritual healing. Along with the original exhibition pieces, Dyalvane has also created three new works for the New York showing: uLwaluko (Rites of Passage), Ubuntu (Humanity) and iNyange (Elders/Wisdom Keepers) (pictured below, respectively). 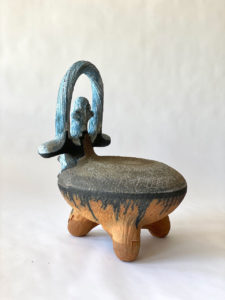 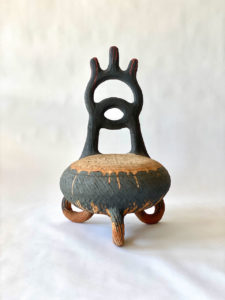 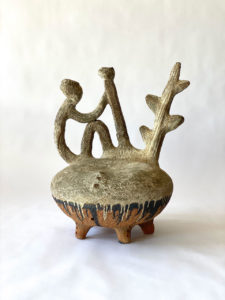 “With Camagu [his 2016 solo], Andile explored his place between the cosmopolitan urban centre of Cape Town and the Eastern Cape, where he was raised,” Jennifer Olshin, a founding partner at Friedman Benda, told Crafts magazine. “With iThongo, he presents us with an entire worldview. With incredibly honed skill and execution, he uses local stories and sacred ideas to create powerful ceramic parables that are literally applicable to the greater human condition.”

iThongo means “ancestral dreamscape” in isiXhosa and is a reference to the medium through which messages (uYalezo uLwimi IwabaPhantsi) are communicated from the ancestors. The exhibition features a series of sculptural chairs, stools and benches, hand-coiled in terracotta clay, arranged in a circle around a fire hearth and herbal offerings in the custom of Xhosa ceremonial gatherings. As such, it is an essential energetic link between the past, the present and the future, and the vital connection that fuels Dyalvane’s artistic practice and spiritual being.

The intricate form of each iThongo seat is based on a single pictogram or glyph from a series of 200 symbols that Dyalvane designed to denote important words in Xhosa life. Taking their inspiration from both Dyalvane’s personal memories and various African artefacts, the seating objects are low and close to the earth – the ground revered as an ancient portal for ancestral communication. Their forms are curved and spherical, signifying both the traditional rondavel structures and kraal enclosures in which livestock are kept.

iThongo is accompanied by a short documentary film as well a catalogue containing academic texts that help shed light on the exhibition’s spiritual aspects, both made possible with the support of BMW South Africa.

For more information about the show, visit Friedman Benda’s website.