← Back to journal
The Jinju Traditional Crafts Biennale brings traditional Korean craft into dialogue with modernity and other craft practices from around the world.

Two works made by Andile Dyalvane for Southern Guild’s 2019 exhibition Communion will feature in the 2021 Jinju Traditional Crafts Biennale, held in Jinju, Republic of Korea, from 4-21 November.

The Jinju Traditional Crafts Biennale brings traditional Korean craft into dialogue with modernity and other craft practices from around the world. The biennale will be split into three exhibitions: Consilience in Crafts (featuring international craftsmen and artists), Intentionality in Tradition (focusing on Korean craft) and Equilibrium in Jinju (showcasing local wooden furniture and metal crafts).

Several accompanying events and activities will also take place, including the Jinju Silk Fair, the 6th Jinju UNESCO Creative Cities International Forum, the 24th Jinju Mask Dance Festival, and a programme of lectures, talks and videos. Situated in the southeast of South Korea, Jinju is one of the country’s leading cities of arts and culture and was designated a UNESCO Creative City in 2019. It has a thriving heritage of traditional folk crafts, is renowned for its silk products, was home to the region’s most famous traditional arts school and produced many popular music composers and singers. 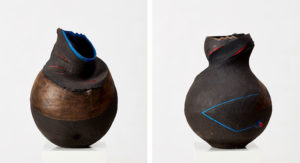 Dyalvane’s Embo (Origin) and Umlisela Nomthinjana (Youth Collectively) are two in a series of three large-scale ceramic vessels enacting the various stages of his personal practice of gratitude, or “camagu”. Collectively, the works explore the themes of reconciliation, gratitude and growth – elements he believes are essential for healing, both in the context of South Africa’s recent history and in a universal sense. Embo acknowledges his spiritual lineage and calls on his ancestors, a practice aided by the cleansing ritual of burning impepho (an indigenous herb loosely associated with clary sage). Umlisela Nomthinjana looks to the next generation, upon whom the preservation of culture ultimately depends.

Each of the vessels’ charcoal clay surface is scarified, a typical gesture of Dyalvane’s ceramics and a nod to traditional Xhosa practices. The works are also emblazoned with bright red and blue details, suggestive of a vibrant culture being born from the earth.