An evening exploring the ancient relationship between tools and food

An evening exploring the ancient relationship between tools and food

Southern Guild clients stepped inside the world of Conrad Hicks and Caro Jesse for a unique evening exploring the relationship of tools and food. The event wove together Hicks’ and Jesse’s abiding interest in nature, human evolution and creative expression, which has fuelled their respective careers as a blacksmith and artist-chef. The evening was a partnership between Southern Guild and BMW, who initiated a series of unique collaborations a year ago, grounded in a common commitment to forward-thinking design and creative excellence. 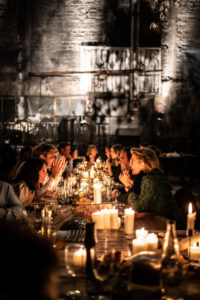 A dinner of discovery inside Hicks’ cathedral-like forge at The Bijou, an old Art Deco cinema, centred around the theme of how the first tools evolved to collect food. The meal, conceptualised by Jesse, was created with layers of meaning, using ingredients and implements for eating that have history and significance from Hicks and Jesse’s discoveries, both individually and together. 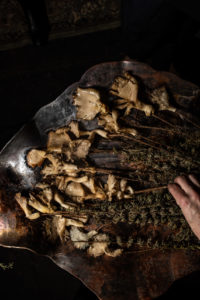 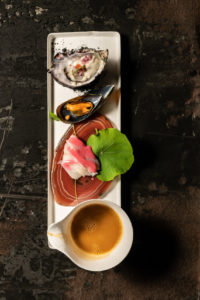 Guests were presented with a unique set of utensils to eat with, including porcupine quills, giant acacia thorns and artisanal cutting knives hand-forged by Hicks. 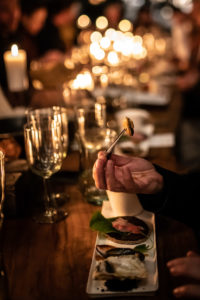 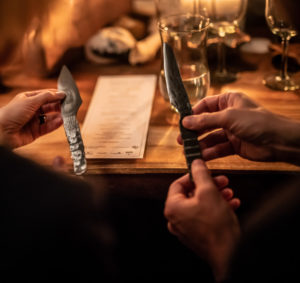 After pre-dinner cocktails, made especially for the occasion by Hope Distillery, each course was paired with pre-release, small-batch wines from Krone and Twee Jonge Gezellen, as well as a limited release from Reyneke, one of South Africa’s most distinctive biodynamic wine farms.

The entire experience was crafted by Jesse and Hicks to stimulate guests’ senses and evoke their curiosity. Tablescapes designed by Jesse incorporated forged pieces of copper and metal tools from Hicks’ workshop, fossils, shells, bones and ancient stone hand-axes picked up on the Cape’s West Coast. 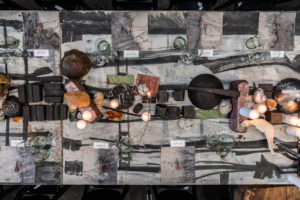 A transient history of varying studies, travel and experiences led award-winning, artist-chef Jesse to find her vocation within creativity using food (and its sensory components) as a medium to express herself. “I create an impression of what I discover, inspired by nature and in my world, inside the boundless area where food and art exist and, what I believe, is their absolute connection to each other,” she said. 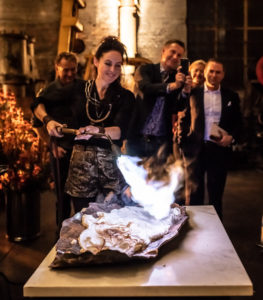 Jesse beguiled guests with Petrichor, an immersive, sensorial experience that she performed at Venice Food Design Week in 2018, in which she recreated the scent of the earth as it is hit by rain. 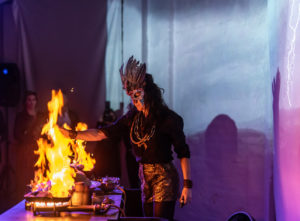 The evening included a private tour by Hicks of his solo show, Implement, at Southern Guild’s gallery. The exhibition includes multiple large-scale pieces of furniture and smaller sculptural objects, as well as maquettes, tools and an anvil to shed light on Hicks’ blacksmithing process. The works are all hand-forged from iron, steel and copper, and are the culmination of an intuitive quest for beauty that he traces back to the origins of humankind. Hicks’ metalwork ripples with a primal energy, captured in the hammered marks and archetypal forms that define his oeuvre. 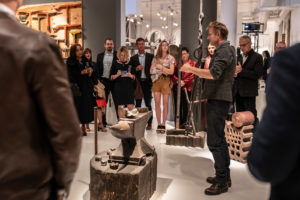 Guests were chauffeured throughout the evening in BMW luxury-class vehicles, including the brand new X7, BMW’s flagship luxury SUV. This truly exceptional evening was part of a series of bespoke events and commissioned artworks that Southern Guild and BMW have collaborated on together since their partnership began in 2018. Fuelled by a like-minded spirit of innovation and high-performance design, the partnership has generated over R1 million in commissions and work directly benefiting the local design community. 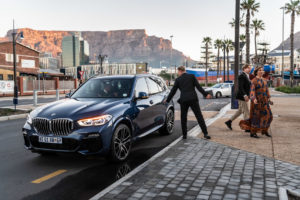 The evening included the premiere of Tools, a documentary film about Hicks’ work made by acclaimed director Gavin Elder. Commissioned by BMW, the film is an intimate portrait of South Africa’s foremost artist-blacksmith as he shares his views on beauty, technology and art.

All photographs by Adel Ferreira.