← Back to journal
Exposing the surface of molten metal as it dries creates arresting textures that can be tricky to pull off: too much irregularity in the level of the surface could compromise the functionality of a piece; too little could detract from its appearance.

Self-taught designer Jesse Ede’s quest to highlight the organic nature of his materials has led him down a path of experimentation with open-cast smelting. Exposing the surface of molten metal as it dries creates arresting textures that can be tricky to pull off: too much irregularity in the level of the surface could compromise the functionality of a piece; too little could detract from its appearance. When it came to producing the Lunar Diners for Xigera Safari Lodge’s design collection, however, this balancing act was even tighter because the tables all needed to look the same. The making of this range offers fascinating insights into Ede’s process. 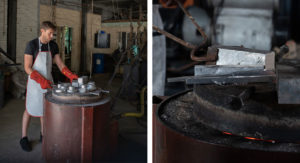 The open-cast smelting process begins with melting the aluminium, but first the ingots must be heated on top of a furnace to prevent them exploding when placed into the crucible inside. Ede usually heats up the aluminium to 800-900°C (above its melting point of roughly 700°C) as he needs the liquified metal to be able to flow quickly across a large open area once it is poured and begins to cool. The hotter the molten metal, the less viscous it is and the more easily it flows. 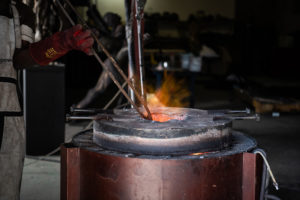 Once heated up, the aluminium ingots are lowered down into the crucible to begin the melting process. 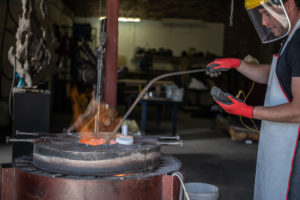 Ede monitors the temperature using a temperature gauge. Balancing on the edge of the furnace in this image is what Ede refers to as “the secret formula” –  special additives that help the metal flow better. 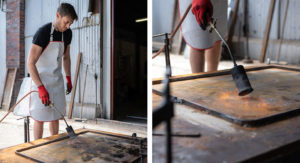 Using a blow torch, Ede heats the mould he made for the table-top: a 30 ml-thick steel plate with a welded-on flat bar frame. As with the ingots, the mould’s metal surface needs to be heated to a similar temperature to the molten aluminium, which will also allow it to flow better when poured.

Ede usually casts in sand, but in this case he was getting varied results each time – not ideal for a range of 10+ tables that need to look consistent. The project necessitated making a more permanent mould that could be re-used and produce close-to-identical tops every time. 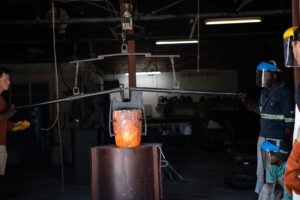 The aluminium is now at the correct temperature and ready to be poured. A special apparatus with a metal claw is used to lift the crucible out of the furnace, placing it on the floor. 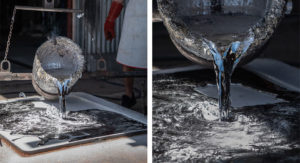 Ede and his team use a hoist crane to position the crucible at the correct height, while a second apparatus is then used to pour the metal into the mould. Two people need to operate this, with one steadying the tool while the other directs the flow of the metal. 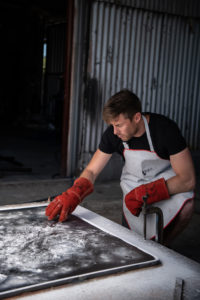 Ede inspects the drying Xigera table-top. The dross that is produced when metal is melted – consisting of impurities in the metal, mixed with carbon and oxygen – is usually scooped out, so that when the metal is poured, the result is a pure and smooth surface. Ede, however, likes to keep some of the dross. “That’s what creates character,” he explains. The resultant swirls, bumps and holes create unique patterns and marks that make a piece interesting and distinctive. He avoids keeping too much though, as the “wilder” the surface is, the less functional it becomes.

The metal cools within a few minutes but takes a further few hours to harden completely. When casting incorporates rocks (as it did with the earlier Venus Table and Lunar Console), the slower it cools, the less likely the rock is to contract and crack. 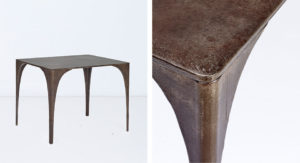 Ede adds a patina to achieve the blackened effect on the aluminium. Compared to bronze, aluminium needs to reach a much higher temperature at which the “pores” open. The patina process then involves spraying the metal surface with an acid containing dye.

To create the table legs, Ede and his foundry team engineered a “pivot” mould, which could be flipped and rotated. A set of wooden template legs were placed into a steel square drum upside down, so that their wider sides were at the bottom. These were then bolted in and the sand packed tightly around them. The sand is a mixture of bentonite clay and a fine silica sand combined with water that is able to hold its shape.

A crane was then used to lift the mould and twist it all the way around (180 degrees), before dropping it down again. The wider sides of the wooden legs were now at the top and with a knock or two, they were able to be pulled out. The result was four tapered cavities that could then be filled with molten aluminium, enabling all four legs to be cast simultaneously.